Google Chrome Ad Filtering: What is it and what it means to you. 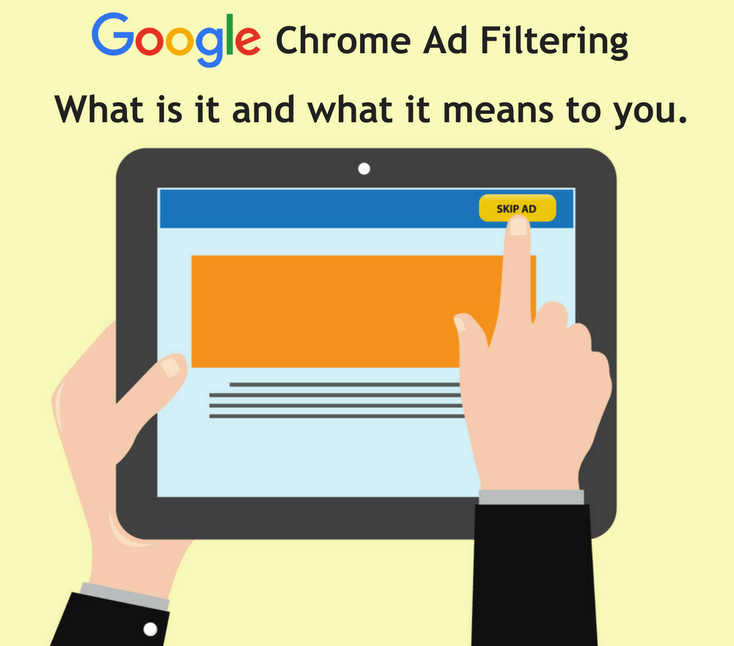 Google Chrome Ad Filtering: What is it and what it means to you.

Chrome Started Blocking Ads
Google announced that from February 15th, 2018, Chrome will start filtering ads on sites that have failed to meet the Better Ads Standards. The process is simple, they will provide a warning to website owners that have failed to meet the standard via the Ad Experience Report, which is part of the Google Webmaster Tools suite. Sites that do not remove non-compliant ads within 30 days of receiving Google’s warning, will automatically have their all of their ad formats filtered out by Chrome.

Google will be enforcing standards developed by the Coalition for Better Ads (CBA), a group whose board includes the Association of National Advertisers, the Interactive Advertising Bureau (IAB), Unilever, Facebook, Google and others. The Chrome Ad Filtering will focus on eliminating ads in Chrome that provide a negative user experience.

What’s the Problem?
For now, only the most offensive ad formats will be considered non-compliant under the coalition’s standards. For example, pop-ups, sound-on auto-play video, and full-screen scrollovers. In accordance with the CBA standards, these ad formats are considered to foster negative ad experiences and will trigger a warning followed by a failing status in the Ad Experience Report.

Google has already begun automatically reviewing sites and notifying those in violation. Sites that are showing non-compliant ads on more than 7.5% of their page views will receive a warning. This threshold will be reduced to 5% in April and 2.5% in August. 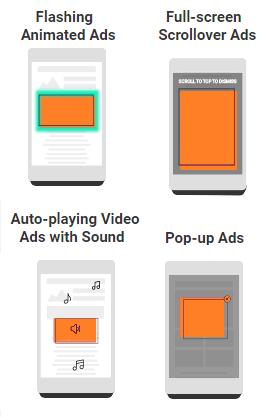 Select examples of ads not compliant with the Better Ads standard

What you can do
FirstImpression.io suggests that you take the coming days to verify that none of your current ad inventory violates these standards. FirstImpression.io only recommends to publishers ad products that are compliant with the Coalition of Better Ads standards, as reported in AdTech Daily when this initiative by Google was first announced in June. Please note: that these standards are evolving, and some publishers may have chosen to continue displaying ad products that are now considered non-compliant.

You can be proactive and view your site’s status via the Google Ad Experience Report. There you can see if and how your site violates the standards. Currently, Chrome is the only browser enforcing the Better Ads standard. However, others may follow. Microsoft, which is on the board of CBA, may begin blocking ads that CBA has deems annoying on the Edge browser.

As mentioned, a 30-day clock starts upon the notification of a violation. Within these 30 days, it is highly recommended that you replace or modify any non-compliant ad inventory on your site. Once this is done you must notify Google of your changes and re-submit your site for an initial review and a change in status. If you do not make any changes and do not request a review within the 30-day timeframe, Chrome will automatically remove all ads from your site, as per the “failing” status in your Ad Experience Report. Should you fail the second review, you will have a 30-day waiting period before you can submit for an additional review. For information on the review cycle, please visit this site.

On a positive note, some of the publishers, which have submitted their sites for review after receiving a “failed” status, said that Google had ceased filtering their ads within less than 24 hours. Google had taken action after having confirmed that the publisher removed the offensive ads from their sites.

Been warned and need to make changes?
FirstImpression.io can create an alternative ad inventory that is 100% compliant with the Better Ads standard.
Don’t lose revenue. Contact us today.